The award came much to the delight of lead architect Steve Hopkins, who said: “Winning the RIBA Stirling Prize is an enormous honour for our project team and our clients, the reward for an intensive collaboration over almost a decade, during which we have grown to love the Everyman and the great city that it serves.”

One of the biggest challenges of the project was to emulate the design of the former 19th century chapel, whilst bringing it into the 21st century. As President of the Royal Institute of British Architects Stephen Hodder said: “Haworth Tompkins have struck the perfect balance between continuity and change to win the hearts and minds of the people of Liverpool with the vibrant new Everyman.”

The team achieved this by looking to the local surroundings, history and community spirit for inspiration. Four new, brick ventilation chimneys have been built, resembling the pillars at the Albert Docks. 90% of the brickwork was recycled and the famous red Neon sign has been retained.

The design has also managed to reference the quirky scouse humour, notably where the solar shading is transformed into a parade of Liverpudlians. 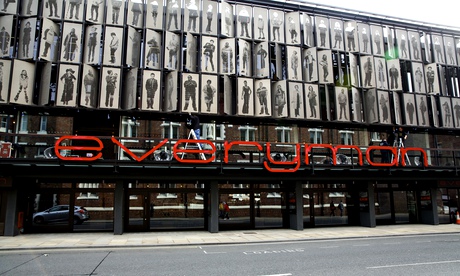 Residing on the affluent Hope Street, is it sandwiched between the modern Liverpool Metropolitan Cathedral and the more traditional Liverpool Anglican Cathedral; the revamped theatre complementing the juxtaposition of these two styles of theatre. That’s what makes the refurbished Everyman Theatre so special; it captures the spirit of the theatre and the city.