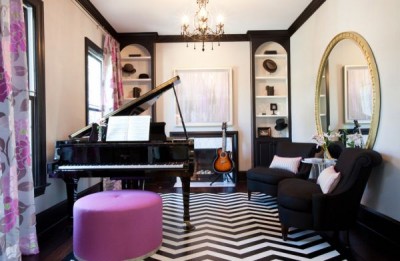 When it comes to picking a place to live, many factors come into play. Price, neighbourhood and distance to the nearest fast food restaurant are all important points to consider. But sometimes you just want to cast everything aside and follow your heart. And who knows better the inner workings of the heart than a musician? That’s why today we’re running down seven great housing locations as recommended by famous musicians.

1. A House in New Orleans They say there’s a house in New Orleans that’s called The Rising Sun. In this instance, we’re inclined to believe them. British rockers The Animals recommend a lovely property in sunny USA. Don’t worry about that whole thing about it being the ruin of many a poor boy. Mostly hearsay, really.

2. A House in the Middle of Our Street Sometimes normal is exciting. Sometimes mundane is relaxing. English Ska band Madness fly the flag for the traditional terrace, and who are we to blame them? Boil up the kettle and wave to the neighbours, it’s time to be completely average.

3. The House That Jack Built What do you mean you’ve never heard of Jack? Well, that doesn’t matter. Heavy metal band Metallica can vouch for him. Intricately planned down to the very last detail, a house built by architect Jack assures nothing but the highest quality.

Like buffalo? Fond of deer? What about antelope? With pure air and a light and balmy breeze, we can’t imagine John Denver recommending anywhere else. And who can blame him? A home on the range sounds fabulous. Perhaps the American West isn’t your cup of tea. Maybe you’re more in tune with British rockers Genesis, who advocate fresh air and the gentle lapping of the tides. There are many benefits to a home by the sea, including, but not limited to: summer paddling, evening walks and a soothing breeze.

6. The House That Dripped Blood You can’t say we don’t cater to everyone! Indie folk rockers The Mountain Goats have got your gothic side covered, providing a healthy dose of spook with your comfortable family home. Featuring a fully furnished kitchen and freshly varnished doors, liking horror doesn’t mean your décor has to be horrible.

7. A Sweet Home in the State of Alabama Lynyrd Skynyrd sure knows how to pick ’em. Featuring blue skies and transparent politics, a sweet home in the State of Alabama is sure to please.

That’s the end of our list of great housing locations as recommended by musicians. There’s undoubtedly something for everybody and we hope it’s been helpful.