As we know, the events happening around the world often tended to influence interior design and the 1940’s were a significant era. The most pressing event of this time was, of course, the Second World War. For most, this meant cutting back and making do with what they already had. It was rare for people to buy new furniture, unless they were particularly wealthy, and so common practice became to embellish. Creating new slip covers out of old cushion fabric, adding a trim to a sofa, and stencilling decoration onto the walls, were simple and cost-effective ways to make a room look new at next to no cost.

Towards the end of the war, interior design became more cheerful and colourful – very much needed after the last five years. Colour schemes tended to include soft pastels, warm oranges and yellows with colder blues and grays, and punctuated with mint green and reds. It was also common for many rooms to have what is referred to as a feature wall: a wall that stands out from the rest due to being decorated with a different colour or with a bold printed wallpaper. While quite daring to go ahead with, feature walls give a room so much character and individuality.

First up, linoleum. In the 1940’s, linoleum was used for flooring, on the walls, and sometimes even on the counter-tops. Linoleum was, and is, perfect because it can be kept plain in a heavily featured room, or it can be patterned to add style to a room lacking in flair. It can also be used to create mock-floorings of brickwork or tile while remaining cheaper and easy to maintain.

The furniture would be elegant and streamlined, often lacking particularly ornate detailing but which could be decorated with a throw or floral cushion. For smaller rooms, furniture placement became an art form and a flowing or symmetrical arrangement, coupled with cleverly decorated walls and the right colour scheme, could make a room appear larger than it actually was. 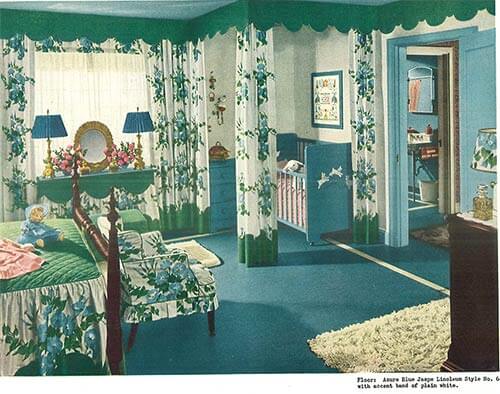 Since a lot of the design from this era was based around hand-made embellishments, you can have a lot of fun when trying to put the 1940’s into your own home. Why not try reupholstering or stencilling some simple patterns onto wooden cabinets to add extra flair. As always, Pinterest is a great place to look when seeking home-made design ideas.