Everyone has wanted to live in the movies at one time or another (though it depends on the movie, very few people would want to live The Road or Darren Aronofsky’s catalogue), but some of us have taken the next step and have tried to bring their favourite movies and TV shows into the real world. You can call it madness if you want, but there’s no denying a lot of effort went into these homes. Some homes listed here, but not all, are even available to buy.

It’s one thing to be a fan of Batman; it’s something else to incorporate a life-size Batcave – themed movie theatre in your abode. Chris Weir spent $150,000 on creating a Batcave in his home where he and his family watch Batman-themed movies and shows. It’s even accessible through a secret bookcase, opened by a Shakespeare bust, and includes memorabilia like movie posters and even a Batman costume.

If you thought the only place you were going to see a live-action Tracy Island was that terrible 2004 movie, then pay a visit to Branksome Park, Dorset, and see what Eddie Mitchell has made. It lacks some of the more hi-tech touches of its boob-tube counterpart, but it is very eye-catching, has won the 2006 National Home Builder Design Awards and it’s even up for sale! Yep, it can be yours for £2.95 million. 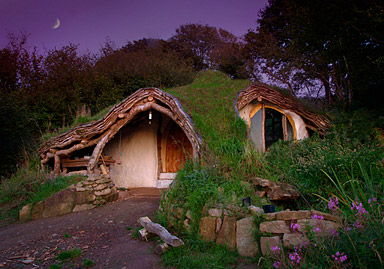 This little abode looks like it came straight from the pages of Lord of the Rings, but can be found in Wales as opposed to Middle Earth. Simon Dale’s recreation of the iconic home from Tolkien’s writings cost about £3000 and was built for his family.

The ultimate home for the die-hard Trekkie, this house including rooms based on the iconic sci-fi series will set you back $35 million. It includes a replica of the bridge of the Starship Enterprise and memorabilia from the films.

Spend a Night WithDoctor Who 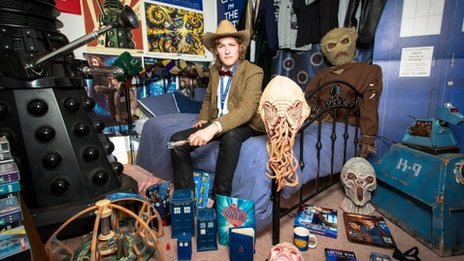 Tom Nichols has called his love of Doctor Who “a mild obsession”, but he has a ten foot tall Tardis outside his Reading house and a full-size Dalek inside the house, among several other memorabilia from the show. He’s also allowed fans to stay the night in his room and a chance to have their picture taken with the Dalek. He’s also lent out his Tardis for weddings.