The Englishman’s Ever Shrinking Castle

Adams SelfStore explores the ever-shrinking housing market and it’s broader historical context. Housing is a reflection of society as a whole, our ever-changing needs and personal choices are represented in what we need out of a home and the broad trends are often indicative of how society has changed.

It will probably be no surprise to you that new houses have been steadily shrinking since the 1970s but the extent of the decline will have you measuring your front room.  New build houses are actually the smallest since the industrial revolution and the smallest in Europe too. How did we end up here and where are we going next?

At its zenith in the 1970s, the average size per sq m for a UK household was 83m, as opposed to now where it sits at around 68m.

This substantial drop in size paired with an equally jarring spike in price means that a house now costs around three times as much as it once did (adjusting for inflation) and is about 17% smaller.

At first glance, this may seem discouraging to a first-time buyer but it’s not the complete picture. It would be easy to paint the 70’s as a time of social mobility and great houses for cheap, the truth, however, is more complicated. The spike on the graph correlates with a time of post-war reconstruction focussed on rebuilding Britain’s industry. This meant low-quality homes, quickly built.

So while it’s true that first-time buyers in the 1970s had an easy time finding a house to fit their budget. It’s also very likely that they were buying a cheaply made terrace house with limited amenities, lower safety standards and in an area that would soon be hit by industrial collapse. Britain’s entrance into the EU in 1975 saw an increase in regulations and the 1980s saw the start of our painful transition from an industrial nation to a service, banking a tech-based economy.

This is when the modern housing market was formed. When city (mostly London) living exploded in popularity, renting became the new norm for the young and those with property started living longer and moving less.

The resulting price spike from the tech and banking boom has had a measurable impact upon the British homestead. The most notable effect has been upon young people.

more young people are living at home than ever before, with one in four young adults (20-34) still living with their parents. This has resulted in the number of family homes with children falling from 52% in 1961 to 32% as of 2017. On top of this, the number of cohabiting families continues to grow faster than married couples and lone-parent families, with an increase of 25.8% over the decade 2008 to 2018 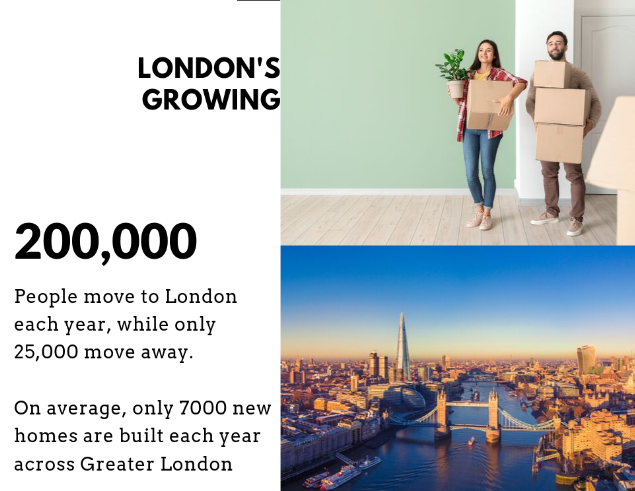 But what does this all mean for housing? It means that the housing market has had to shift dramatically to accommodate the modern, older family.

The modern middle-class house has become a statement in independence for both parents and children, often featuring an en-suite for the master bedroom, almost always a bedroom for each child and amenities such as wall-mounted TV’s have become standard. The emphasis is on providing privacy for each inhabitant over individual room utility. Old studies, dining rooms and entertaining spaces are often converted to add bedrooms or more bathrooms as the amenities of a house focus more on the individual’s needs than the collective.

Internet ubiquity has consolidated this trend in more ways than one. The ability of each family member to watch what they want means that there are new technical considerations when building or renovating a house. A modern landlord must take factors like data and wifi accessibility into account when choosing a property or location as the ageing family population of the UK are pickier than ever when it comes to tech.

Homes are as much fashion as they are living space and as such, they are susceptible to change, misfires and “oh god why?” moments of self-reflection 10 years later.  Houses have undergone many such paradigm shifts since the 1970s.

Post-war homes were stripped of their colour coordinated bathrooms by the thousands, the great salmon and avocado cull as it came to be known. Rooms were simplified and stripped-down as television dominated leisure time, people suddenly didn’t get enough use out of a dining room so these were converted to other more modern luxuries such as home gyms, projection theatres or gaming rooms.

However, in the exhausting and never-ending cycle of fashion, these seemingly wonderous and utopian achievements of domesticity are looking tacky once again. Outdated home gyms are quietly collecting dust and that £3000 projector you thought would last forever, is completely outdated.

Modern interior design seems to be a reaction to the avalanche of leather sofas and kitchen islands from the mid-2000s and has refocussed on core design principles rather than features or gadgets. Natural light has been re-emphasised due to image sharing sites like Instagram, plants are dominating front rooms once again and record players are taking up space across the country. These trends all seem to be a rejection of the overly materialistic and modernising 2000’s and reflective of a desire to live a simpler, less tech-focused life.

While it is true that homes have never been smaller its important to consider the wider socio-economic trends that have precipitated this. The post-war housing boom developed where there was industry, industrial collapse and tech drove us back to the cities and now the cities are so expensive that each new suburb with a good train station is eventually made a part of the cities ever-growing appeal. Our housing choices reflect where we are as a society and as we continue to change at an ever-increasing speed, we can look at housing to try and help us to understand.

Matthew Goldsmith is a researcher and copywriter. He works for Adams SelfStore and lives in Liverpool, England.