The Grim Reality of Getting onto The Housing Ladder… 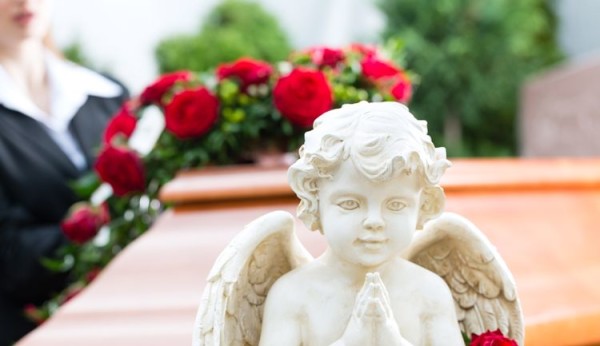 Young People Relying on Parents’ Death to Get Onto Housing Ladder

With sky-high house prices putting homeownership ever further out of reach for young Brits, property marketplace TheHouseShop.com wanted to investigate which options offer the best chance for young people to take their first steps onto the housing ladder.

YouGov research commissioned by TheHouseShop.com has found that just 1 in 10 Brits (10% excluding “don’t know”s) thought saving up from monthly income and buying a property themselves was the best option available for young people wanting to buy their first home. With expensive rents putting a strain on savings potential and low wages for young professionals imposing a tight salary multiple for mortgage applications, young people in the UK are struggling to find a viable route into home ownership that doesn’t involve relying on parents or family.

When asked which option provided the best chance for young people to get onto the housing ladder, the top 3 answers all involved reliance on mum and dad or family members in one way or another. 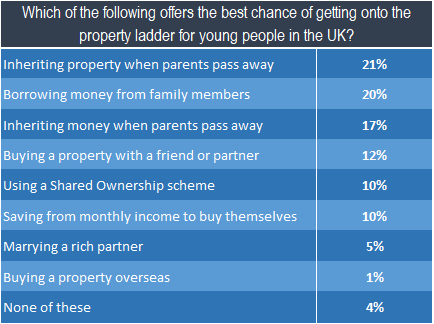 The results make for depressing and slightly morbid reading, with 1 in 5 Brits (21% excluding “don’t know”s) saying young people’s best chance of getting onto the property ladder was inheriting property when their parents pass away. A further 17% said inheriting money after parents death offered the best chance for aspiring homeowners, while a further 20% (excluding “don’t know”s) said borrowing money from family was the best option available.

Therefore, in total, almost 60% of respondents (58% excluding “don’t know”s) thought young people would have to rely on inheritance from their parents or loans from family members to buy a property.

12% of respondents thought that buying a property with a friend or partner was the best chance for young people, while 1 in 10 thought that taking advantage of a Shared Ownership scheme offered the best route into home ownership. Among the least popular responses were marrying a rich partner, with 5%, and buying a property overseas, with just 1% (both excluding “don’t know”s).

Nick Marr, co-founder of TheHouseShop.com, gives his thoughts on the results and the challenges facing aspiring young homeowners today:

“Young people, especially the Millennial generation, have been the ones least benefitted by the substantial growth in the housing market over the past decades. Homeownership among under 30’s has dropped significantly and many young people today are struggling to see how they can realistically make the jump from renting to buying.”

“The idea that so many young people could be relying on the death of their parents to take their first steps onto the property ladder is indeed depressing, but if the gap between wages and house prices continues to widen, it is difficult to see a viable alternative for young aspiring homeowners.”

“With the substantial boom in the Buy To Let market over recent years, we have ended up with a market where young professional renters are effectively funding the BTL mortgage payments of older generations – with little prospect of the roles reversing. This can be particularly hard to take for the many Millennials who have seen their ‘Baby-Boomer’ parents build up substantial personal wealth from homeownership.”

“It would seem that older generations are sympathetic to the plight of young Brits desperate to own their own home, as many parents with children in their twenties today are already making plans on how they can give their kids a helping hand onto the property ladder.”

Among the youngest respondents, aged 18-24, a sizable 27% (excluding “don’t know”s) said that they believed young people’s best chance of getting onto the housing ladder was inheriting property when their parents pass away. However, some in the industry believe that homeownership is indeed achievable for young people in the UK today, but it requires a change of mind-set and the acceptance that you may not actually live in the property you buy.

Jordan Silverstone, a 26 year old property investor from London who now owns a large portfolio of student rental properties, gives his thoughts on the survey results and how young people can indeed take their first steps onto the property ladder:

“In the UK we are obsessed with owning our own home. Most of these people don’t realise how easy it can be to get on the property ladder. But their expectation is that they’ll be buying a property to live in themselves. Once you change this mentality and open your mind to other opportunities out there, there’s less of a reliance on family help. Think about investing your money rather than buying something to live in and suddenly the prospect of home ownership becomes far more achievable.”