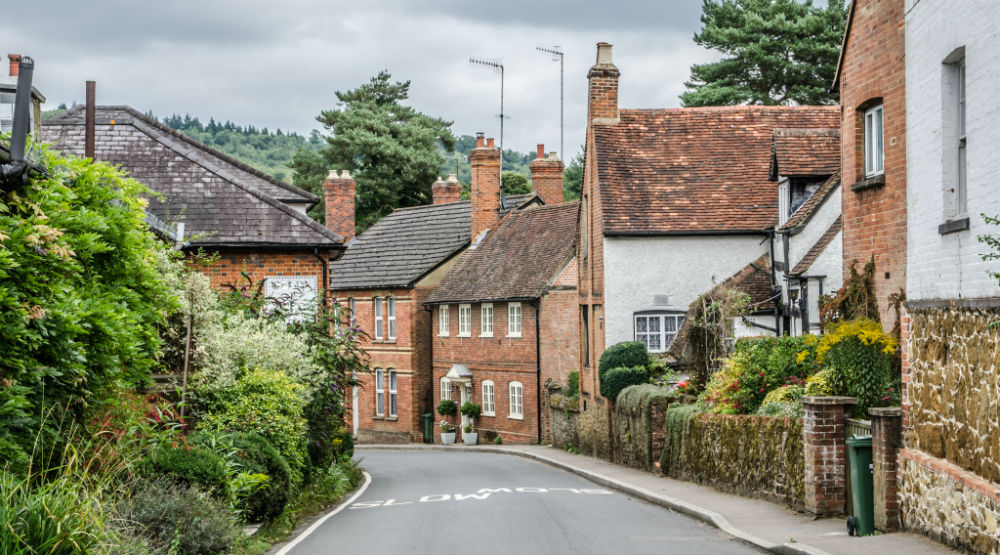 If you’re looking for property around London and the Home Counties, keep an eye out for Shere, officially one of the prettiest villages in Surrey. Located on the A25 between Guildford and Dorking in the picturesque Surrey Hills, a designated Area of Outstanding Natural Beauty (AONB), Shere is a small but perfectly formed parish of no more than a thousand souls.

The village of Shere has a wealth of traditional features and everything you could ask for on a picture postcard. There’s a central cluster of mostly 16th and 17th century timber framed village houses, as well as a teashop, a forge, and a local art gallery and museum. For families, the village has a flourishing primary school and 2 pre-school nurseries.

According to A History of the County of Surrey, the village church is ‘second to none in Surrey for beauty and antiquarian interest’. St James Church dates back to Norman times before the 12th century, and is approached up a cobbled lane through a lych gate designed by renowned architect Edwin Lutyens in 1902.

Shere offers its residents the opportunity to escape the hustle and bustle of more urban areas while remaining deceptively close to the main arteries – the A3 and M25 – to reach Central London, Heathrow and Gatwick airports quickly and conveniently. By train, London can be reached in as little as 35 minutes from Guildford, and less than an hour via Gomshall and Dorking.

That said, it’s the village setting in the picturesque and tranquil Surrey countryside that attracts residents and visitors alike. Shere is the ideal base from which to explore the wonderful Surrey Hills, Surrey’s National Park, with its many walking trails and cycling routes. Another great place for the whole family to enjoy the Great Outdoors is the National Trust owned Arbinger Roughs and Netley Park, where hidden forests with ancient trees and flower strewn grasslands are just waiting to be discovered!

In terms of property, expect to find a historic and quintessentially English village with plenty of ‘olde worlde’ atmosphere, according to Brian Gale Surveyors who specialise in local period and historic buildings. Handsome detached properties in Shere will be selling for an average of just over £1 million. The average price of property in Shere is £840,895, similar to nearby Peaslake but substantially more expensive than Gomshall and Ewhurst.

Research conducted recently by Knight Frank suggested that the Surrey Hills was the most expensive of the 46 AONBs in the country for buying residential property, and there’s certainly no shortage of traditional old English period houses in the area that will make wonderful characterful family homes.

With a village history going back to the Domesday Book and a historic feel that has been wowing film makers as far back as the early 1900s, it’s no wonder Shere is a popular location for film shoots. The village has earned fame in recent years as the setting for a number of films.

You may recognise the village from the 2004 blockbuster Bridget Jones: The Edge of Reason, when St James Church features in a wedding scene with Renee Zellweger. Or perhaps you’ve seen The Wedding Date (2005) with Debra Messing and Dermot Mulroney, or the 2006 romcom The Holiday starring Kate Winslet, Cameron Diaz, Jude Law and Jack Black.

Shere has two very popular pubs in the centre of the village, the White Horse and The William Bray. The latter dates back to the late 18th century and is named after a local solicitor and antiquary whose most famous work The History and Antiquities of the County of Surrey was published in the early 1800s and is still the basic printed source for Surrey historians today. The Bray family has had a long history with the village, having been Lords of the Manor of Shere since 1485!

What’s more, The William Bray pub has celebrity connections, starting with its owner, the ex-Formula One driver and former Top Gear Stig, Julian Bailey. Famous patrons of the pub are rumoured to include Jenson Button and George Clooney!