Décor through the Decades: 1950s 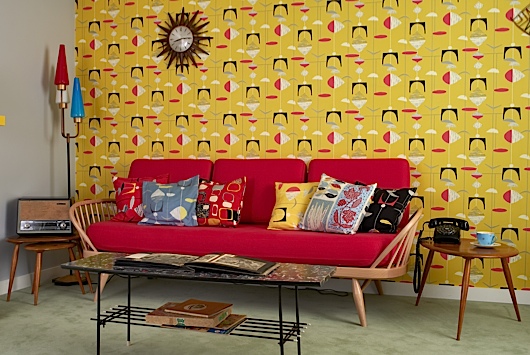 During the fifties there was a great emphasis on the rebuilding process following the end of World War II. Part of this was the Festival of Britain which took place in 1951 and featured exhibitions on science and technology as well as the arts, architecture and design.

Along with the coronation of Elizabeth II in 1953, the upbeat mood of the decade was very much reflected in the era’s interior design.

The décor of the fifties

Rebuilding and redecorating houses inspired people to take more of an interest than ever in the interior design of their homes, with magazines full of tips and ideas for homeowners. This resulted in a style of décor that was much more fun, modern and colourful than the austere look of the previous decade.

Rooms were light, airy and had an open plan layout to best display the new shapes and styles of tables, chairs and sofas.

New fashions in furniture were driven by the likes of Charles and Ray Eames designing the iconic Eames lounge and DSW chairs.

For colour and print, the name of the decade was Lucienne Day; her colourful, artistic designs featured on everything from wallpaper to ceramics. She was heavily influenced by artists such as Miró, Kandinsky and Klee, which allowed people to incorporate into their own homes the sort of design which had been previously reserved for galleries and collectors. Her husband, Robin Day, was also one of the most prolific furniture designers of the century.

It’s easy to incorporate the bright prints and colours of the 1950s into modern homes; just choose your favourites and get started!

For furniture, it is still possible to get hold of originals; if not then there are plenty of modern pieces that are heavily influenced by the fifties style.

The kitchen is a great place for a nod to the fifties – think American diner with bright colours and rounded furniture as well as the all-important fitted kitchen and chequered flooring. Smeg fridges are a great place to start.

However you choose to take inspiration from the 1950s, the fanstastic shapes and colours of the era’s décor are emblematic of the retro look, and yet they still work well with the fashions and functions of today’s homes.

Advantages and Disadvantages of Privately Selling
Posted on 29th March, 2018