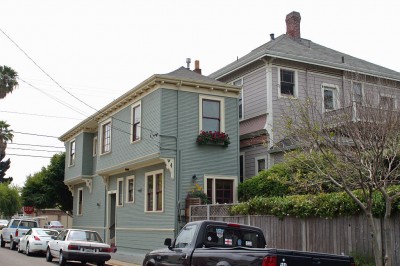 Revenge buildings or spite houses are residential or commercial structures which exist because the owners want a 5 foot wide novelty home with triangular windows. They exist out of spite, gleeful revenge, and pure sadistic joy. Here are some of the most recognisable and infamous spite houses:

Four levels high and 10.5 feet across (at its widest) the Skinny House in Boston can only be entered via a small alley. The definitive origin of the narrowest home in Boston’s North End remains unknown, but widely speculated.

Local legend claims that two brothers inherited land from their father upon his death. Whilst one brother left to serve in the military the other brother built a large home, leaving his sibling with a piece of land which was seemingly too small to build upon. When he returned the soldier built a small wooden house to spite his brother, and block the view from his home.

At 300 years of age, this is believed to be one of the oldest spite houses in America. It is unknown when the ‘spiteful’ section, a 10 foot wide extension was built. Many speculate that the house was once occupied by two brothers who couldn’t get along, and that one built the extension to block the view of the other. Another theory is that it was built to block the view from a nearby tavern.

Built in 1905, according to local lore the Spite Tower was built to block the site of a local resident.

860 square feet and shaped like a slice of pie. According to local legend, this spite house was built after a neighbour made an absurdly low offer for a small piece of land. As a means of getting revenge for the offer the lands owner built this small property, which blocked the neighbours’ open space. Another legend claims that the property was built to house the owners’ wife, after a divorce settlement which left her with the small piece of land.

The shallowest commercial building in the world, only 5 feet wide, and existing merely to occupy a space. In 1913, the Sam Kee Company built the property, with extra space being achieved through the use of pop out windows.

Built across the road from the Westboro Baptist Church is a house painted in the rainbow colours of the LGBT Pride flag, and purchased by the owner of non-profit organisation Planting Peace. This house should be viewed as more of a protest or freedom house rather than a revenge or spite house, as it was built purely to promote tolerance in the face of adversity.