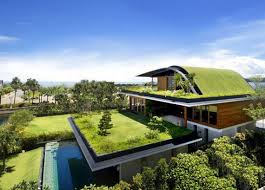 Green and sustainable architecture has been around for millennia, but it is only in recent years that it has risen to prominence. This rise can be attributed primarily to necessity, but it also comes from the multitude of creative and pioneering architects dreaming up environmentally sound and beautiful buildings that capture the imagination of the public. Let’s take a look at some of their profiles.

The heavyweights of green architecture

Known as: The father of organic architecture.

Quote: “The building grows out of the landscape as naturally as any plant; its relationship to the site is so unique that it would be out of place elsewhere.” Possibly one of his most famous designs, Wright used the surrounding paradise of forest and waterfall as a key aspect of his project. Less about sustainability and more about integration with nature, the building is famous for its use of local materials and cantilever design, the latter allowing the active waterfall to run underneath the house. Original rock ledges were kept in place inside, the edges of windows were cut into the stone walls for a more natural look, and the swimming pool is spring-fed.

Quote: “Don’t fight forces, use them.”

This design never became mainstream, but it is the source of inspiration for many. Fuller utilised natural air movements for heating and cooling via the ‘dome-effect’, cut the amount of material used in construction, and reduced water waste through greywater use and a water ‘fogger’ that replaced showers. It was one of the first attempts at an autonomous building design – separated from the ‘grid’ to become self-sufficient. All of this meant it was very environmentally friendly. Ironically though, it was criticised for its flouting of the principles of organic architecture, in that it could never adapt fully to its surroundings. Join the organic school of thought with Fuller’s own principles though, and we get close to the green architecture that we know today.

Known as: One of the greatest architects of the modern age.

Known for: The Shard, the New York Times building, the Pompidou Centre.

Quote: “One of the most important things is to have happy buildings”.

Nestled in the heart of Golden Gate Park in San Francisco, this masterpiece of green architecture blends in with its surroundings so well that it is almost completely camouflaged. It features three domes rising from a 2.5 acre green roof, under which there exists a man-made rainforest, planetarium, natural history museum and an aquarium. The roof is planted with local flora that provides habitats for indigenous fauna, and absorbs 7.6 million litres of water annually to be harvested and recycled. The building contains over 60,000 photovoltaic cells and uses natural light in 90% of its occupied spaces. As well as all of this, if the structure wasn’t green enough already, the windows are automatically controlled depending on the outside temperature, removing the need for wasteful mechanical climate control systems. For more of Renzo Piano’s green work, have a look at his Volcano Buono in Italy.

Known as: One of the 50 people who could save the planet.

This building adheres to many of Yeang’s bioclimatic skyscraper techniques. Firstly, an uninterrupted ecological spiral ramp runs from ground level, connecting the surrounding park with the building’s basement and cascading terrace gardens, removing all barriers to biodiversity and allowing the movement of organisms into all spaces. The domination of vertical organic landscaping also creates a shade cooling effect. Incidentally, the total surface area of vegetation in and around this building exceeds the footprint of the site itself. Next, a shaft cuts deep into the centre of the structure from the upper floors, maximising the use of natural light. And finally, sunshade louvers on the façade of the building, designed with the path of the sun in mind, help automatically create microclimates around the building. This might be performed by reflecting sunlight into an office or even opening up the atrium to a cool breeze.

Quote: “Nature is 3.8 billion years ahead of us in research and development.” Throughout his architectural career, Eric Corey Freed and his green architecture firm have tended to veer towards housing designs. He has focused on adapting existing homes to become greener as well as designing ground-breaking plans for new-builds. The house above combines both these approaches. The two wing tips that climb upwards can physically turn towards the sun, and the roof is shaped with the prevailing wind direction in mind, so that the house is heated and cooled efficiently by the sun and the wind. In addition the building contains two different types of solar panels as well as rainwater recycling systems.

You can find more information about Eric and his approach to green architecture in this video:

Eric devotes a lot of his time to teaching a new generation of both architects and lay-people on the value of green architecture, ensuring that the gospel is well and truly spread.