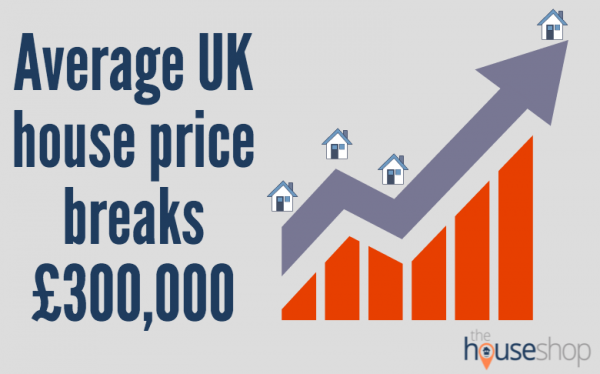 However, for Londoners the average price of a house is more than double that at £644,045 though according to the data, London prices are now at a ‘stand still’. The survey by Rightmove reveals that the average price rose to £303,190 in March, up from £299,287 the previous month. That’s a 3% jump and it’s the largest since the credit crunch began in 2008. Among the reasons for the increase, according to the firm, is soaring demand and restricted supply of property for sale.

The average price for a property

Their data reveals that in March 2006, the average price for a property was £200,980 so while house prices have rocketed by 50% in 10 years, wages have only risen by 22% over the same period. Rightmove’s housing market analyst, Miles Shipside, said: “While the start of 2016 has seen a modest increase in properties coming to market, there are insufficient numbers in many parts of the country to meet demand. “Increasing numbers of aspiring home movers now cannot afford to do so.” He added that the tighter lending criteria for a mortgage and the level of average wages is putting pressure on those wanting to trade-up and first-time buyers alike.

Londoners are seeing house prices not increasing because of stretched affordability – a situation that is also now growing around the country. Mr Shipside added: “Of the top four risers, three are Northern regions while London is a shadow of its price-rise powerhouse which has driven up the national average for the last five years. There’s now a myriad of local markets [in London] which sees some boroughs dramatically down or up but overall they cancel each other out.” Rightmove have also revealed that the average prices for property in the South East are now £399,680, in the South West they are £292,251, in the East of England the average cost is £326,836, in the West Midlands it is an average £204,140 and in the North West homes cost £177,437.

Another reason for the recent increase in property prices is, according to some media reports, a surge in buyers wanting to beat the 3% stamp duty hike that comes in from April with buyers snapping up homes. Mr Shipside also points out that if first-time buyers and those wanting to trade-up had enjoyed higher wage growth over the last 10 years, they would still be chasing a limited supply of housing and buyers would have been out-bidding them on the available properties.