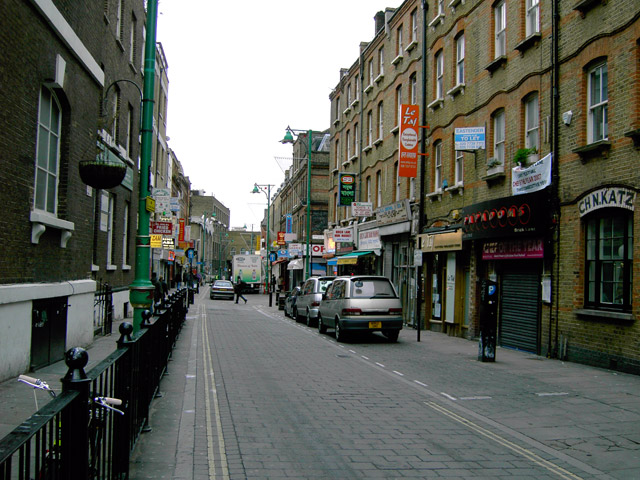 Situated in East London, not too far from Whitechapel Road, Brick Lane is home to one of London‘s most artistic Sunday markets and one of the most prominent places for the city’s Bangladeshi community.

Brick Lane, formerly Whitechapel Lane, is so called due to the brick and tile manufacturers who used to live in the area in the 15th century. Nowadays, it is most famous for being the main hub of London‘s Bangladeshi community, gaining it the nickname “Banglatown”. There are thus plenty of curry houses to be found in the area, including Nazrul, the Lanes oldest restaurant, Sheba, voted “Best Curry House in the UK” by Cobra Good Curry Guide, and the critically-acclaimed Cinnamon.

On weekends, one can visit the Truman Markets, which can be found in the Old Truman Brewery situated around the Lane’s northern area. It is made up of five markets with different opening times, all promising intriguing and unique wares. From the Sunday UpMarket with its art and homemade foods (open 10am to 5pm Sundays), to The Tea Rooms, which offer a wide range of antiques as well as a nice coffee (open 11am to 6pm Saturdays and 10am to 5pm Sundays), these markets offer something for everyone at a good price. The Truman Brewery also offers plenty of treats all week round, including Europe’s largest record store Rough Trade and the Stolen Space Gallery. Another attraction of the Truman Brewery is 93 Feet East, a bar and live music venue, popular with the young artistic crowd found in the area (open Thursdays 5pm-11pm, Friday-Saturday 5pm-1am, and Sundays 2pm-10.30pm).

Art fans will not only appreciate the aforementioned Stolen Space Gallery and The Brick Lane Gallery, but the street art as well.

The Brick Lane area offers a variety of flats and apartments, generally costing around £500,000 (though it is rare to find a whole house for under £1 million). Brick Lane is highly recommended as a place to reside in; who wouldn’t want to be so close to such a wide variety of venues and culture?